The following is an opinion article submitted by one of our contributors. You can also contribute with your opinion by sending an email to contact@cryptozoologynews.com

The recent articles in Cryptozoology News regarding “Predator-like” humanoids –“Has Anyone Else Seen This Being?: Pennsylvania Family Claims Predator-Like Humanoid Sighting” and “Washington Man: ‘I Have Also Seen the Predator-Like Humanoids” — have hit a nerve in me and have made me take a closer look at the phenomenon.

A quick glance at the headlines bring to mind images from the 1987 classic Sci-Fi film Predator: Jesse Ventura spitting tobacco and claiming he doesn’t have time to bleed; a massive humanoid with dreadlocks leaping through the jungle; and, who can forget at the end of the movie when Dutch, played by Arnold Schwarzenegger, declares, “you are one ugly m**********r.” I was a sophomore in high school when I first watched the movie, so seeing “Predator” in a headline evokes a feeling of nostalgia in me. However, these articles are not about a band of rogue commandos chasing an extraterrestrial through the jungles of Central America; no, something else—something real—is going on here, and it deserves a closer look.

At the heart of the articles mentioned is something that sounds almost like a cloaking mechanism at work in the humanoids observed. Similar to the way that the Predator in the movie could make itself invisible, the creatures in these reports seem to be able to do the same thing—at least to a degree. It is as if they can simply make themselves disappear. As outlandish as this may sound, it is not without precedent.

As mentioned earlier, the “cloaking cryptid” issue has been on my mind since reading the first article. I have been trying to locate sources for similar reports that I vaguely remember from the past. Luckily, a book that I just finished, Linda Godfrey’s Monsters among Us, discusses the issue and even has a section titled, “The Invisibility Question.” Also in the book, she recounted a spate of Bigfoot sightings in which the creature exhibited strange traits, possibly even cloaking. The creature in question had been spotted by a number of people and had killed hundreds of chickens; strangely, it left no tracks, even in soft ground and muddy areas; at times, the monster appeared to be transparent.1 A farmer, who along with his family, had witnessed the creature said the following:

“The funny thing is that it never left footprints, even in mud, and when it ran through tall weeds you couldn’t hear anything. And sometimes when you looked at it, it looked like you could see through it, like it was a ghost or something.”2

In what could only be, in my mind, a clear case of synchronicity, the cloaking characteristic was mentioned on the November 17th edition of The Existence of Strange Things, an internet radio show and podcast hosted by Radio Memphis. The cast from Arcane Radio—Lon Strickler, Sean Forker, and Butch Witkowski—were guests on the show and they were discussing various Fortean topics. My ears pricked up when the subject of cloaking Bigfoots was mentioned. Strickler noted that this type of report is nothing new. However, according to Forker, these kind of reports are increasing in frequency—at least in his home state of Pennsylvania. About 2–3 sightings of this type occur each year.

To further cement the reality of “Predator” sightings, I received a response from one of my Twitter followers after tweeting a link to the Cryptozoology News Washington State report:

“Though how he comes across and how he tries to understand his perceived experience seems strange or even absurd, I have had and tracked down others with similar experiences and I can tell you that something is going on in many of these cases. Explaining is unlikely though.”

Explaining is unlikely though. Wow! What an admission—from an experiencer no less—and, I cannot think of a truer statement.

When I set out to write this piece, I considered exploring what is behind these “pixelated” cryptid reports. I have some thoughts: could the hair on their bodies bend or distort light in some way which provides natural camouflage? Such technology has been explored by the military. Another thought: are these beings interdimensional? If so, are witnesses observing a moment of “crossover?” To fully explore these possibilities would take more time than I have for this article. And, maybe it’s pointless. The truth may be unattainable; perhaps we are dealing with things that are unknowable. Explaining is unlikely. 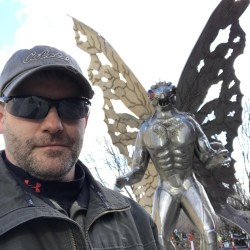 Denver Michaels is a book author with a passion for cryptozoology, the paranormal, lost civilizations and all things unexplained.

Michaels is employed as an engineering technologist and works full-time. He is married with three children.

A Connecticut veteran says he saw an unidentified biped. The eyewitness, whose name and location were provided but were kept...

A Missouri minister says she and her family believe there is an unidentified two-legged creature roaming their property. The woman,...

A registered nurse in Vermont says she saw a humanoid-like figure that resembled a chimp. The 67-year-old, who didn’t provide...